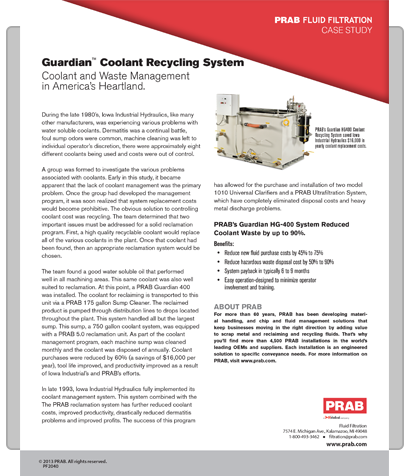 During the late 1980’s, Iowa Industrial Hydraulics, like many other manufacturers, was experiencing various problems with water soluble coolants. Dermatitis was a continual battle, foul sump odors were common, machine cleaning was left to individual operator’s discretion, there were approximately eight different coolants being used and costs were out of control.

A group was formed to investigate the various problems associated with coolants. Early in this study, it became apparent that the lack of coolant management was the primary problem. Once the group had developed the management program, it was soon realized that system replacement costs would become prohibitive. The obvious solution to controlling coolant cost was recycling. The team determined that two important issues must be addressed for a solid reclamation program. First, a high quality recyclable coolant would replace all of the various coolants in the plant. Once that coolant had been found, then an appropriate reclamation system would be chosen. 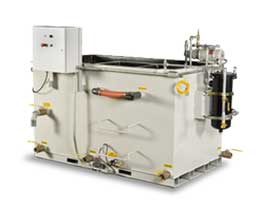 The team found a good water soluble oil that performed well in all machining areas. This same coolant was also well suited to reclamation. At this point, a PRAB Guardian 400 was installed. The coolant for reclaiming is transported to this unit via a PRAB 175 gallon Sump Cleaner. The reclaimed product is pumped through distribution lines to drops located throughout the plant. This system handled all but the largest sump. This sump, a 750 gallon coolant system, was equipped with a PRAB 5.0 reclamation unit. As part of the coolant management program, each machine sump was cleaned monthly and the coolant was disposed of annually. Coolant purchases were reduced by 60% (a savings of $16,000 per year), tool life improved, and productivity improved as a result of Iowa Industrial’s and PRAB’s efforts.

In late 1993, Iowa Industrial Hydraulics fully implemented its coolant management system. This system combined with the The PRAB reclamation system has further reduced coolant costs, improved productivity, drastically reduced dermatitis problems and improved profits. The success of this program has allowed for the purchase and installation of two model 1010 Universal Clarifiers and a PRAB Ultrafiltration System, which have completely eliminated disposal costs and heavy metal discharge problems.

PRAB’s Guardian HG-400 System Reduced Coolant Waste by up to 90%.

For more than 60 years, PRAB has been developing material handling, and chip and fluid management solutions that keep businesses moving in the right direction by adding value to scrap metal and reclaiming and recycling fluids. That’s why you’ll find thousands of PRAB installations in the world’s leading OEMs and suppliers. Each installation is an engineered solution to specific conveyance needs. For more information on PRAB, visit www.prab.com.