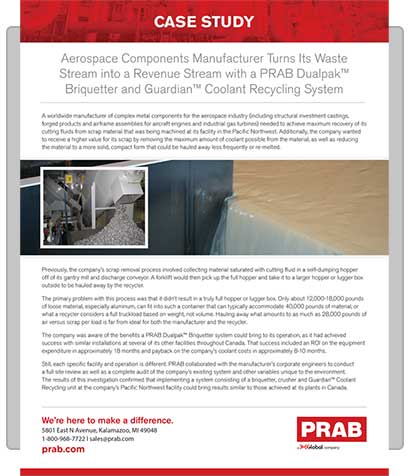 With the combination of the briquetter and a crusher ahead of it, the company was able to efficiently and significantly reduce the bulk density of its scrap material. Instead of dumping the contents of the hopper directly into an outside container, the forklifts now deposited the scrap material into the briquetter, which uses dual compression technology to transform the material into a “puck” that is almost 90% solid–the highest-density puck in the industry.

A worldwide manufacturer of complex metal components for the aerospace industry (including structural investment castings, forged products and airframe assemblies for aircraft engines and industrial gas turbines) needed to achieve maximum recovery of its cutting fluids from scrap material that was being machined at its facility in the Pacific Northwest. Additionally, the company wanted to receive a higher value for its scrap by removing the maximum amount of coolant possible from the material, as well as reducing the material to a more solid, compact form that could be hauled away less frequently or re-melted.

Previously, the company’s scrap removal process involved collecting material saturated with cutting fluid in a self-dumping hopper off of its gantry mill and discharge conveyor. A forklift would then pick up the full hopper and take it to a larger hopper or lugger box outside to be hauled away by the recycler.

The primary problem with this process was that it didn’t result in a truly full hopper or lugger box. Only about 12,000-18,000 pounds of loose material, especially aluminum, can fit into such a container that can typically accommodate 40,000 pounds of material, or what a recycler considers a full truckload based on weight, not volume. Hauling away what amounts to as much as 28,000 pounds of air versus scrap per load is far from ideal for both the manufacturer and the recycler.

The company was aware of the benefits a PRAB Dualpak™ Briquetter system could bring to its operation, as it had achieved success with similar installations at several of its other facilities throughout Canada. That success included an ROI on the equipment expenditure in approximately 18 months and payback on the company’s coolant costs in approximately 8-10 months.

Still, each specific facility and operation is different. PRAB collaborated with the manufacturer’s corporate engineers to conduct a full site review as well as a complete audit of the company’s existing system and other variables unique to the environment. The results of this investigation confirmed that implementing a system consisting of a briquetter, crusher and Guardian™ Coolant Recycling unit at the company’s Pacific Northwest facility could bring results similar to those achieved at its plants in Canada.

With the combination of the briquetter and a crusher ahead of it, the company was able to efficiently and significantly reduce the bulk density of its scrap material. Instead of dumping the contents of the hopper directly into an outside container, the forklifts now deposited the scrap material into the briquetter, which uses dual compression technology to transform the material into a “puck” that is almost 90% solid–the highest-density puck in the industry. In the process, cutting fluid is squeezed out of the scrap and collected in a bottom recovery pan. Next, the fluid is pumped from the pan to the filtration unit, which removes tramp oils and suspended solids before pumping the recycled coolant back to the machines where it can be reused and contribute to improved tool life.

As the pucks come off the briquetter, they are placed in a gaylord box, a 4’x4’ lined, corrugated cardboard box that fits on a skid. The high-density, boxed briquettes can now be loaded onto trucks at full 40,000-pound capacity, which satisfies the recycler’s preference for maximum weight and also means fewer haul-away visits.

Another reason the company opted for the briquetting scenario is that pucks offer greater potential to re-melt solid scrap in-house. While recyclers typically specialize in this type of work, this manufacturer now had the option to add a re-melting furnace within its plant and gain even more value from its scrap by minimizing material loss versus remelting loose chips. 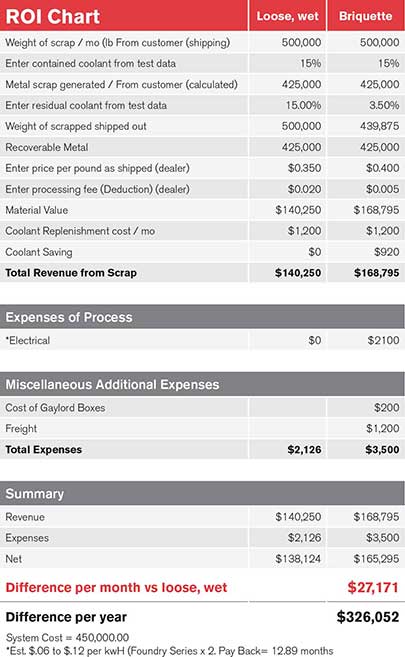 All told, the crusher/briquetter/recycling system enabled the manufacturer to see substantial benefits consistent with those achieved at its Canadian facilities as well as by other aerospace manufacturers who implemented a similar system:

By briquetting its solid waste, this company turned its scrap and spent fluid from a waste stream of loose, flowing byproduct to a 90% solid commodity that is released from its coolant and can now be processed, reused or even sold for value. The reclaimed cutting fluid also adds to what is now a revenue stream by reducing the need to purchase pure coolant concentrate that costs between $20-$30 a gallon. Ultimately, this solution not only constituted a new approach to processing equipment but also a new way of thinking that many aerospace manufacturers are adopting: Scrap and spent fluids are a part of what they produce and can be turned into real dollars that go directly to their bottom line.