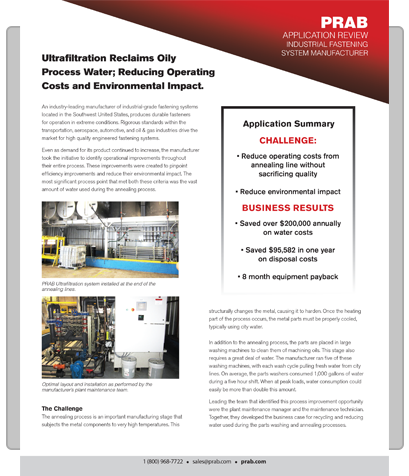 Even as demand for its product continued to increase, the manufacturer took the initiative to identify operational improvements throughout their entire process. These improvements were created to pinpoint efficiency improvements and reduce their environmental impact. The most significant process point that met both these criteria was the vast amount of water used during the annealing process.

The annealing process is an important manufacturing stage that subjects the metal components to very high temperatures. This structurally changes the metal, causing it to harden. Once the heating part of the process occurs, the metal parts must be properly cooled, typically using city water. 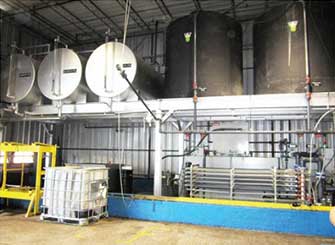 In addition to the annealing process, the parts are placed in large washing machines to clean them of machining oils. This stage also requires a great deal of water. The manufacturer ran five of these washing machines, with each wash cycle pulling fresh water from city lines. On average, the parts washers consumed 1,000 gallons of water during a five hour shift. When at peak loads, water consumption could easily be more than double this amount.

Leading the team that identified this process improvement opportunity were the plant maintenance manager and the maintenance technician. Together, they developed the business case for recycling and reducing water used during the parts washing and annealing processes.

The initial challenge to recycling the water was the high concentration of entrained oil from the parts as they came from the machining centers. The historical process for dealing with this water was a centrifuge system that sucked the oily water into drums. The drums were then stored on site and periodically hauled away. This process used valuable plant floor space to store the drums, and the manufacturer had to pay a contractor to haul away the hazardous materials. With the ever increasing costs of city utilities and machining oils, combined with the corporate initiative to be environmental stewards, the team was able to make a solid case for exploring viable filtering and recycling options.

During their investigation, the team reached out to PRAB engineers, tapping into the company’s 60 years of fluid filtration experience. Working as an integral partner on the project, PRAB installed a pilot Ultrafiltration System in the facility for a trial evaluation. Within a short period, the system proved very successful. Capital funding was quickly approved for the purchase of a new PRAB Ultrafiltration System, which paid for itself within just eight months of installation.

PRAB’s line of Ultrafiltration Systems are designed to separate emulsified oils and suspended solids from wastewater and coolant – and reduce oily water volumes by as much as 98% without the use of chemical additives. System effluent water can then be safely discharged to the sewer or reused in the manufacturing process.

The cost of operating this system is just two cents per gallon – far below the combined expenses of incoming city water, sewer charges, and subsequent haul away cost.