The graphite released from machining cast iron quickly fouls filtration media, preventing flow. The concentration of graphite particles, as well as the iron particles increases so that large amounts of sludge build up at the bottom of takes, lines and machine bases. To remove the sludge, production must be shut down for manual cleaning. In addition to the labor needed for cleaning, there are many other costly processes such as loss in production, haul-away, and new coolant purchases. All these costs accumulate from not having an automated system in place to separate chips from coolant and properly separating graphite from fluid (in this instance) when machining cast iron. There is however a solution for effectively removing graphite to maximize coolant life, productivity, and overall process operation. But first, where does this graphite come from…

In forming cast iron, carbon is added in excess of its solubility at room temperature. As it solidifies and the molten metal cools, the solubility limit of carbon decreases and the excess carbon precipitates as solid particles of graphite. The shape and size of the particles are controlled with silicon-gray cast iron has flake graphite and ductile iron nodular graphite.

High carbon, high silicon, iron alloys are known as cast iron which is a composite of graphite precipitate and solid metal. The graphite acts as a chip breaker and helps draw heat away from the workpiece interface-reducing friction on the insert during cutting operations. It also makes cast iron 10% lighter than steel and has excellent damping coefficients for gears and other components. Although, there are issues if it is not separated from cutting fluid, as noted above. 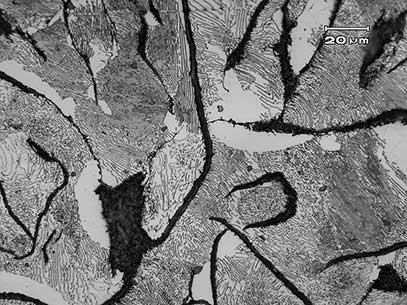 An efficient and cost-effective process for removing graphite, iron, and other ferrous material from cutting fluid is through magnetic separation with a magnetic separator. Separators typically employ high-intensity ferrite or rare earth magnets within a fully energized rotating drum to continuously remove ferrous particles. They are often used as a pre-filter to limit contaminants from reaching subsequent filtration equipment and require limited maintenance and no disposable filtration media. 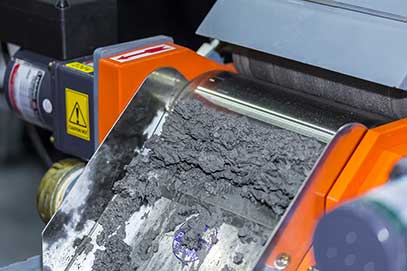 Close-up of a magnetic separator.

Magnetic separators are fully automatic. Dirty coolant enters though a dirty fluid inlet and flows across a rotating magnetic drum. The largest particles are attracted here and held just at the entry to the discharge beneath the unit. As more fluid flows into the magnetic field, finer particles are attracted and held. As a result, a sponge-like cake is created and acts as a filter, attracting graphite particles, wheel abrasives, tramp oil, and more.

Coolant exiting the magnetic filter typically has up to 97% of particulate removed. Ferrite magnet models remove ferrous particulate in excess of 40-microns, and rare earth models in excess of 15-microns-without the use of consumable filtration media.

Magnetic separators can also be used in combination with second stage paper bed filtration where finer filtration is required or as pre-filtration-reducing the load on other filtration processes.

For more information regarding PRAB, please visit prab.com or contact us.