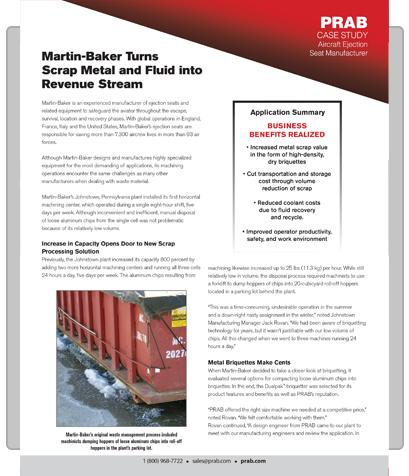 Aerospace manufacturer needs a chip and fluid processing system to keep up with its machining demands by reducing the volume of metal turnings and to recover expensive cutting fluids for reuse.

Martin-Baker is an experienced manufacturer of ejection seats and related equipment to safeguard the aviator throughout the escape, survival, location and recovery phases. With global operations in England, France, Italy and the United States, Martin-Baker’s ejection seats are responsible for saving more than 7,300 aircrew lives in more than 93 air forces.

Although Martin-Baker designs and manufactures highly specialized equipment for the most demanding of applications, its machining operations encounter the same challenges as many other manufacturers when dealing with waste material.

Martin-Baker’s Johnstown, Pennsylvania plant installed its first horizontal machining center, which operated during a single eight-hour shift, five days per week. Although inconvenient and inefficient, manual disposal of loose aluminum chips from the single cell was not problematic because of its relatively low volume. 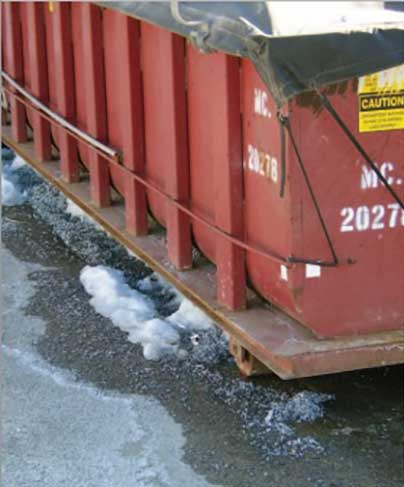 Previously, the Johnstown plant increased its capacity 800 percent by adding two more horizontal machining centers and running all three cells 24 hours a day, five days per week. The aluminum chips resulting from machining likewise increased up to 25 lbs (11.3 kg) per hour. While still relatively low in volume, the disposal process required machinists to use a forklift to dump hoppers of chips into 20-cubicyard roll-off hoppers located in a parking lot behind the plant.

“This was a time-consuming, undesirable operation in the summer and a down-right nasty assignment in the winter,” noted Johnstown Manufacturing Manager Jack Rovan. “We had been aware of briquetting technology for years, but it wasn’t justifiable with our low volume of chips. All this changed when we went to three machines running 24 hours a day.”

When Martin-Baker decided to take a closer look at briquetting, it evaluated several options for compacting loose aluminum chips into briquettes. In the end, the Dualpak™ briquetter was selected for its product features and benefits as well as PRAB’s reputation.

“PRAB offered the right size machine we needed at a competitive price,” noted Rovan. “We felt comfortable working with them.” Rovan continued, “A design engineer from PRAB came to our plant to meet with our manufacturing engineers and review the application. In addition, PRAB is a well-established company with a good reputation for quality and service.”

Before Martin-Baker was willing to purchase the model MX20-15M Dualpak™ briquetter with a 2.5” steel belt conveyor to automatically convey the briquettes to a storage hopper, it wanted to ensure it made fiscal sense. A material test of the Dualpak™ briquetter offered Martin- Baker the opportunity to put together a return on investment model based upon real results of its specific material.

Martin-Baker sent a 55-gallon (200-litre) drum of loose chips from the machining centers to PRAB’s test facility, which resulted in a test proving a volume reduction of 12.5 times that of the loose aluminum chips. In addition, the test confirmed coolant recovery from the chips, which could be recycled back into the process.

“We worked with our metal recycler to determine how much more we would get for the briquetted aluminum over loose aluminum chips,” explained Rovan. “Based upon current prices and the density of the test briquettes, we get $0.17 per pound more for our briquetted material over loose chips. In addition to the increased revenue from the briquetted material, the coolant we recover and recycle from this process saves us about $5,000 per year.”

Rovan continued, “Despite our relatively low volume of chips, we will have a return on investment for the Dualpak™ system in less than 30 months. After that, it’s 100 percent profit.”

In addition to the additional revenue received from the aluminum scrap in the form of briquettes, the new process improves the productivity of the machinists who had previously spent a considerable amount of time handling chips both inside and outside the facility.

“We’re pleased with PRAB’s Dualpak™ briquetter,” noted Rovan. “We are able to take a cheap byproduct of the machining operation and make it much more valuable. In addition, our process of disposing metal scrap has become more ergonomic and safer.”